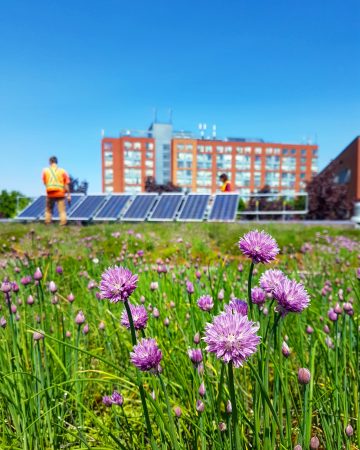 Photovoltaic (PV) panels and green roofs have traditionally been seen as two distinct technologies vying for roof space. According to the City of Toronto’s Green Roof Bylaw, new buildings subject to the policy may deduct roof area dedicated to renewable devices from their total required green roof area. This often results in two spatially distinct roof areas, one with PV panels and the other with vegetation. In fact, GINKGO’s experience pairing these two systems supports scientific evidence from around the world that integrating green roofs and PV panels may result in benefits that are mutually reinforcing. Recognizing the synergistic benefits of pairing green roof technology with PV panels is important for architects and engineers who are designing buildings within the urban core, especially across North America, where 30% of emissions can be attributed to building operation and construction[1]. Now more than ever, governments are taking action to reduce their greenhouse gas (GHG) emissions. Toronto has committed to city-wide emission reduction targets of 80% from 1990 levels by 2050. Federally, in October 2018 the Liberal government announced a carbon tax on fuel producers and large emitters in order to achieve national targets of 30% emission reduction from 2005 levels by 2030. In order to achieve these targets and reduce dependency on conventional fuels, incorporating low emission clean technology into city design is integral.

Green roofs have measurable benefits on environmental concerns like stormwater runoff and the Urban Heat Island (UHI) effect, which can be further enhanced when paired with PV technology. As the topic of study by academics and industry alike, time and time again, researchers have observed a positive correlation between PV module efficiency and green roof health.

One large factor in this is the role green roofs play in rooftop temperature moderation. Higher temperatures negatively affect how efficiently PV panels can generate power. Based on Standard Test Conditions of PV panels operating at 25°C, a 1°C increase in ambient temperature causes a 0.5% reduction in the output of electricity[2]. Inefficiencies in PV panel output have economic and social implications. Building owners must purchase electricity to meet their energy needs, extending the payoff period of their PV investments and increasing demand on the electricity grid during peak hours.

Green roofs are able to mitigate losses to PV panel output by lowering the ambient temperature of the green roof area. A recent study done by green roof manufacturer ZinCo found that integrating a solar base with their green roof system improved PV panel efficiency by 5% compared to a white PVC (white roof) with solar panels. In Toronto, 2018 research from the Green Roof Innovation Testing Laboratory (GRIT Lab) found that Green Roof PV systems resulted in lower surface temperatures (greater cooling) than White Roof PV systems. The study also reinforced the negative effect of temperature on PV panel performance, and the positive influence of green roof systems on PV power output.[3] Another study, this one from Spain in 2013, found that pairing PV systems with a sedum green roof resulted in lower rooftop surface temperatures as well as an average increase of 3.33% in electricity output, compared to the conventional gravel roof.[4] These results are supported by research in Germany, China, New York, and Portland.

The benefit green roofs provide to PV panel power generation is not one sided. On the contrary, studies show that PV panels improve the performance of the plant community they are installed above. A study in Denver, Colorado found that plants in the shade of PV panels had higher growth rates with a greater spread, and an overwinter survival rate 35% higher compared to plants in exposed areas.[6] Additionally, shaded areas create microclimates atop the green roof and allow a more diverse range of plants and insects to establish, contributing to expanded rooftop biodiversity[7]. Studies show that increasing plant diversity by introducing specifically paired plant types is correlated with improved green roof ecosystem services, such as temperature moderation, reflectivity, and evapotranspiration rates.[8] One consideration for the long term success of pairing PV panels with green roofs is the need for regular maintenance to ensure that vegetative growth, specifically taller herbaceous plant species that may be present on a prairie meadow green roof, are trimmed regularly to minimize shading on PV panels.

Ginkgo Sustainability has installed and maintained integrated systems, and works with suppliers who are experienced in the technical aspects of these systems. For example, ZinCo Canada offers a green roof and solar integrated system that uses the green roof components to fasten solar panels, avoiding penetration of the waterproofing membrane[9]. This system was used on a green roof that Ginkgo Sustainability currently maintains on a long term care home in the Peel Region.

Contrary to popular belief, green roofs and photovoltaic panels are mutually beneficial technologies that, when paired in the same roof space, enhance each other’s benefits. In fact, these benefits have been recognized by the city of San Francisco, which in 2017 passed the Better Roof Ordinance requiring green roofs, solar, or integrated systems be installed on most new construction.[1] With looming environmental pressures and UN reports that irreversible effects of climate change are only 12 years away[2], it is crucial that low impact clean technology be integrated into our built environment in a way that maximizes economic and environmental returns.

[5] Report on Environmental Benefits and Costs of Green Roof Technology in the City of Toronto. Ryerson University. 2005.