As the use of extensive green roofs continues to rise, and more and more buildings choose to adopt them in their construction, some of the more interesting and useful aspects of green roofs really start to make themselves known! Besides direct benefits like reducing heating in buildings and allowing for wildlife habitats in the city, one of the more passive, interesting benefits that green roofs can bestow is helping to manage stormwater runoff.

Let’s face it – your standard blacktop roof isn’t designed to retain water – quite the opposite! It isn’t meant to hold water as this would risk leaks or damage to the building below it. So when mighty storms or intense rainfall hit, the water simply accumulates on the many flat, impermeable surfaces in the city landscape and quickly drains into the local sewer system. This can lead to what’s called a “combined sewer overflow”, where the sewer system of a city is unable to handle the level of water it’s receiving. Unfortunately, this means that much of it ends up overflowing directly into local water reservoirs – for us in Toronto, this usually means the Don Valley River or Lake Ontario gets hit with gouts of untreated mixed sewage during storms, which is exactly as unpleasant as it sounds. 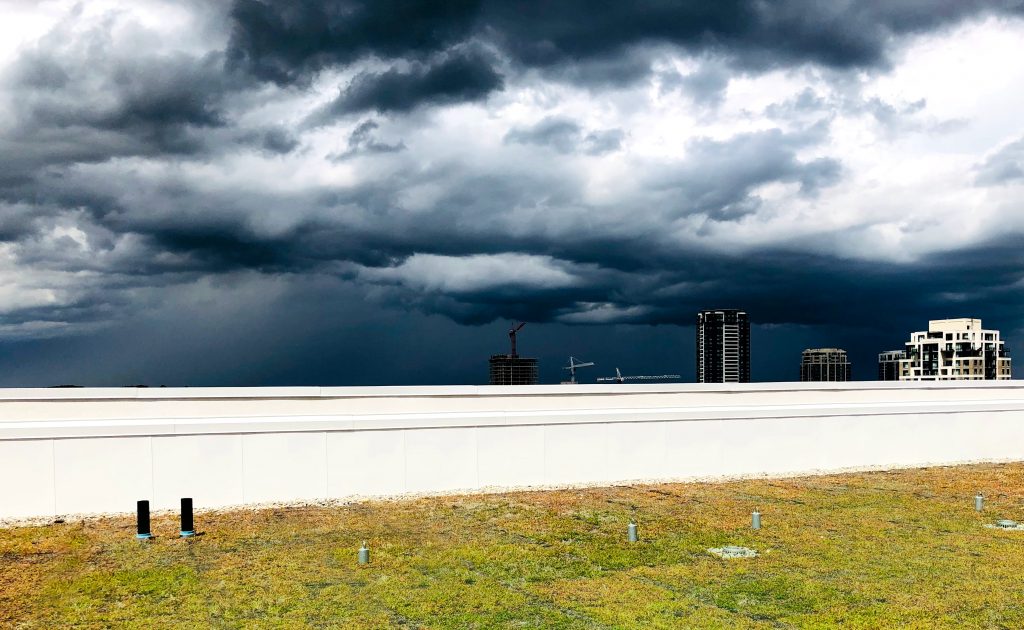 This is where green roofs come in! The combination of media, water retention layers, and the plants themselves lead to multiple methods of stormwater retention: first and foremost, water that falls onto the green roof can be taken up by the plants in the process of evapotranspiration and so never ends up running off at all – instead it’s used by the plants for their life processes and evaporates back into the atmosphere. Secondly, and more significantly, extensive green roofs retain the water for longer than your standard flat roof – they release it much slower, and so during heavy storms rather than running right off of the roof it trickles down at a much lower rate. This gives the sewage treatment system the chance to deal with the amount of water it’s receiving, and means that stormwater run-off goes through the proper channels and is treated accordingly.

The more extensive green roofs that are in place in a city, the more pronounced this effect becomes, and the more effective it is! With all of the new buildings and condominiums that are being constructed, installing green roofs atop them helps us to regulate the flow of stormwater and contaminants and help improve the environment we live in.